Must Read: The Third Edition of the Udaipur Bird Festival 2017 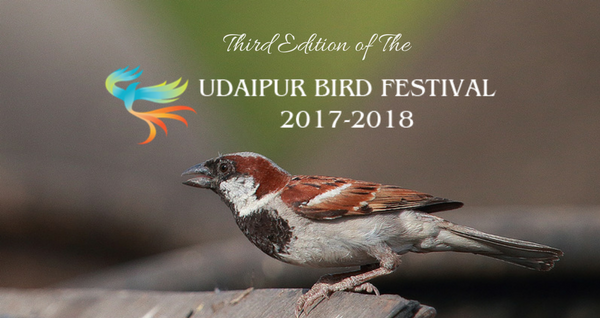 All over the world, Udaipur is famous for its lustrous lakes, verdant hills, national parks, sanctuaries, forts, royal palaces, ‘havelis’ and temples. A lesser known feature is its varied wildlife. Udaipur and its neighborhood are home to a huge variety of avian species. Organized with the aim of creating public awareness about the need for protection of wildlife and at the same time promoting tourism is the city, the three-day long Udaipur Bird festival opened with a bang on Dec 23rd. The third edition of the annual event began with the opening of the Golden Park by Home Minister Gulab Chand Kataria.  Located on the bank of Lake Pichola, the park is named Golden Park as at the sunset the reflection of sun rays in the water turns everything golden. The spot adds another beautiful sunset point in the city to such places at Sajjangarh, Fatehsagar, and Karni Mata Mandir. This theme-based park is to have yellow flowers and plants.

The park being developed with a grant of 46 lacs by UIT Udaipur in an area of about two hectares is to have several attractions for visitors like safe Selfie points, ‘Tabla’ shaped ‘Muddas’ to sit on, three beautiful chattris, walking track, adventure point, cafeteria and a portion with dense forest. There would be a herbal park with a variety of about 25 varieties of herbs. Visitors and bird lovers would be delighted to watch about 150 species of resident and migratory birds. In the next phase dummies of animals, especially of those that are extinct or in great danger are also to be put up so as to give the young generation an idea of an evolution of the animal world. Near Kamal Talai, would be demonstrated how panthers eat, drink, rest and hunt. Three rooms are also to be built.

On the first day of the fair, began a photography and stamp exhibition on birds in the Information Centre. On display is the treasure of knowledge about the daily routine, migration etc of birds in the form of stamps and paintings in the big gallery. There are 126 photographs of about 120 bird species taken by 40 photographers. Also, on display are color artistic photographs of terrestrial and water birds both residents and migratory birds of countries such as Mongolia, Siberia, and of European countries. Photographs show flying owls, geese, myna sitting on cows, Saras, flying cranes; a peacock sitting with the background of rising moon, ‘baaz’ hunting its prey, flamingo searching food in water etc. are some of the big attractions. Being highly appreciated are over 5000 stamps out of 4 lac collected by Pushpa Khamesra of Udaipur.

These range from the ones issued between 1871 and 2017. Also, the lively photographs of the life cycle of four butterflies by bird expert Mukesh Panwar of Dungarpur and Neha Manohar of Udaipur. In the seminar of Udaipur Bird festival on the second day, the participants who are bird experts from India and abroad were on their opinion that sincere and concerted efforts were needed for the protection of birds.

They presented detailed and authentic information about endangered birds species and the condition of wetlands in the world. Asad Rehmani, former Director, Bombay Natural History Society talked about specialties of incredible birds of India. He said that the biodiversity of India was the best in the world. Mukhya Vanjeev Pratipalak, G.V Reddy talked about the ecosystem services of birds and said that if we can save the environment, there would be no need to filter water. He talked about keeping water unpolluted through natural techniques. Bird specialist K.P.S Gopi Sachdev talked about 15 species of cranes that he said cranes were two hundred fifty million years old. He expressed deep concern about the fast declining number of species in Asia.

The living pictures of the business of birds in the country by Rajat Bhargava of BNHS shocked the audience. A detailed presentation of the bird festival was also made. According to Manoj Kulshresta, state coordinator Rajasthan Water Birds Census Programme, out of 11,000 species of birds in the world, 1400 were found in India. He said that one Bargular bird eats 3 insects in one minute and 18 species of this bird come to Udaipur that eat up 15000 insects in a dip. If we can save this one species we would not need much pesticides. Bird Race that has been introduced for the first time turned out to be a big attraction. Bird watchers from Udaipur and other places participated in it enthusiastically and tried to watch birds from a distance without disturbing them. The first prize was won by team King Vulture led by Pradeep Sukhwas that spotted 170 bird species. Led by Pratap Singh Chundawat the hornbill team saw 113 species. 160 species were found by Indian Pitta Team led by Vinai Dave. Falcon Team that was led by Anil Rodgers spotted 132 species. Team Garud led by Shailendra Tiwari found 147 species while 150 species were spotted by Raptor Team led by S. Sardania.

The valedictory function was held on Dec 25, when the ‘experience of field visited’ were presented. Also, emphasized was the need for protecting wetlands. Bird photographers were advised to shoot birds in their natural habitat without disturbing them. Prizes were given away to winners of various competitions.