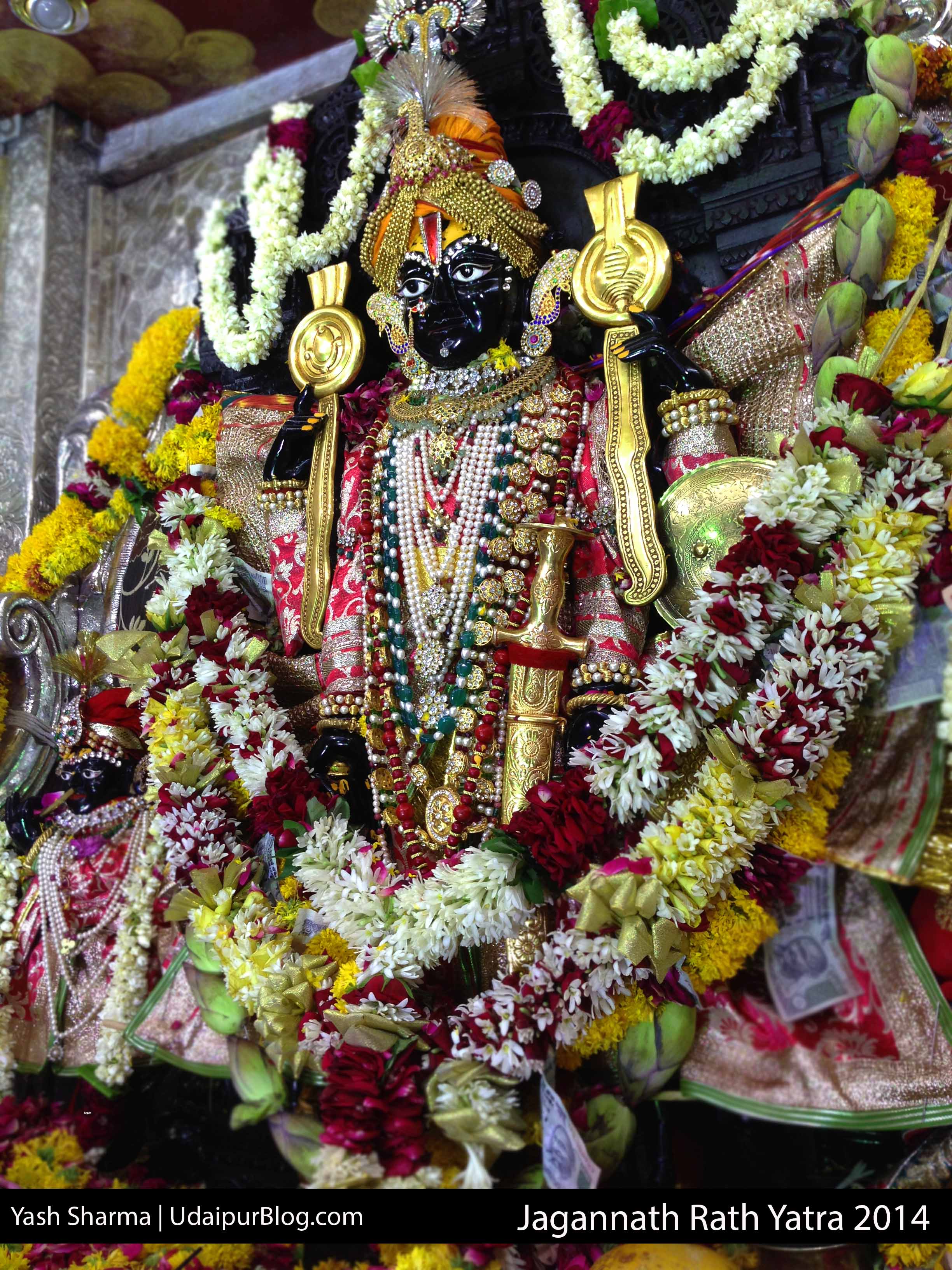 Every year the grand Rath-Yatra is held on the Ashaad Shukla Dwitya of Vikram Samvat, as per the Hindu calendar. On this day thousands of devotees pull the huge chariot loaded with ornaments and idols of Lord Jagannath, Balabhadra and Subhadra in a long procession.
Though the centre of attraction is Orissa, many other Indian cities also have their own extraordinary programs on this day. Udaipur holds the distinction of holding the 3rd largest Rath Yatra in India. The city has two Rath Yatras on the same day at different locations. The Rath Yatra at Udaipur is a significant event in the entire state that is witnessed by numerous tourists both foreigners and Indians. During the Rath Yatra, The City of Lakes is colored in the most vivid hues of sheer joy &amp; enjoyment and is flocked with devotees who wish to pay their honor to the deities and seek their blessings.

Rath from Jagannath Dham, Sector-7
The Rath Yatra started from Shri Jagannath Dham Sec-7, Hiran Magri and lead towards the Krishi Mandi, Shiv Mandir, Machla Magra, Sec-11, Patel Circle, Khanjipeer, Rang Niwas, Bhattiyani Chohatta to Jagdish Mandir. From there it merged with the Jagdish Chowk Rath Yatra in the same route and then took a separate route from RMV Road to Udiapole, Takeri, Madari, Sec-6 and returned back to the Shri Jagannath Dham of Sec-7.
Largest distance covered : 21kms

Main Attraction
The Rath Yatra that started from the ancient Jagdish Temple, near the City Palace.
The Rath, a gigantic chariot, approximately 15 feet long, 8 feet high and adorned by precious metals like silver. This eventually turned into a procession which passed through a large part of the city. The path followed by this Rath was Jagdish Mandir- Jagdish Chowk, Ghanta Ghar, Bada Bajar, Bhadbhuja Ghati, Teej Ka Chowk, Dhan Mandi, Asthal Mandir, R.M.V. Road, Rang Niwas, Kalaji- Goraji, Bhattiyani Chohatta, and Rath Yatra concluded with the Maha Arti at the Jagdish Temple.