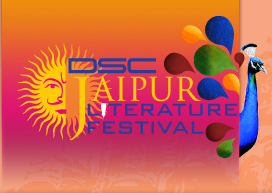 The Jaipur Literature Festival(JLF) – A grand event… with grander publicity & episode grandiosity! As the name depicted & as the description lamented, the event had captured for itself an already starred attention. But vaguely & sadly, the end of the event saw a criticism nationally as well as internationally in the literary world.

Though there may be an unending debate over the nature of the fest & how it was enacted. Somewhat (in petty senses) a successful event commercially but still just to acquaint our readers with the ultimate reasons of the literary & the journalistic criticism, we describe here some points :-

First of all, a Literature Festival organized in India without any writer of Indian language! Leave others, not even a single writer of Hindi language. French sessions can on a general basis be of no use or leisure to the common Indian folk!

Secondly, the fest basically lacked in the presence of “authentic” writers, particularly the current international fictional faces of Indian Literature. It was more of a celebrity pamper than a literary directorate. Most of the guests invited were those people who belonged to film industry, politics or other areas; and later had written a book or two by choice.

Chetan Bhagat is still a commercial attraction (an IIT-D, IIM-A graduate will always be!) No doubt, his height of success is not that easy to achieve but why to forget those 3 Bookers (Aravinda Adiga, Arundhati Roy, Kiran Desai) that came to India in the last 15 years; the quality of writing clearly demarcates the persisting difference between a writer & an engineer.

And the prominent one, the major attraction in fact 😉 the Salman Rushdie controversy! I must share it that Salman Rushdie has been awarded the “Booker of Bookers Award” for his book “The Midnight Children” twice. That is, he is till date considered the best awarded writer in the world. Any writer may have tentative thoughts but if a person of his status after achieving such a long & class experience has given written form to his ideas then those definitely deserve to be given a view. First an invitation, then asked not to come & at last a video conferencing under restrictions!

A literary issue was converted into a religious issue on the grounds of political benefits & losses. No comments over religious sentiments, but how many know that what has been written actually in his book!! How can you, when it is already banned! People’s justification lies only on what the leaders say. And the world knows how much they need to be trusted! Literature should be seen in literary terms, at least for the sake of this art. The problem is that we misdifferentiate some things, rest it is in itself a big beautiful world.

And lastly & very simply, 🙂 if it was to be an all-English show; as a part of the lavish Indian class of English-reading youngsters, we had expected our stars- Nicholas Sparks (A Walk to Remember, The Notebook, Nights in Rodanthe); Cecelia Ahern (P.S. I Love You) & Paulo Coelho (Brida, The Alchemist, etc.) to “preach” us but no such loved name! Even a single of these would have made the day of millions. But regrets of expecting them to be invited!

In all, a big name, but remained bereft of a worthy judgement ……