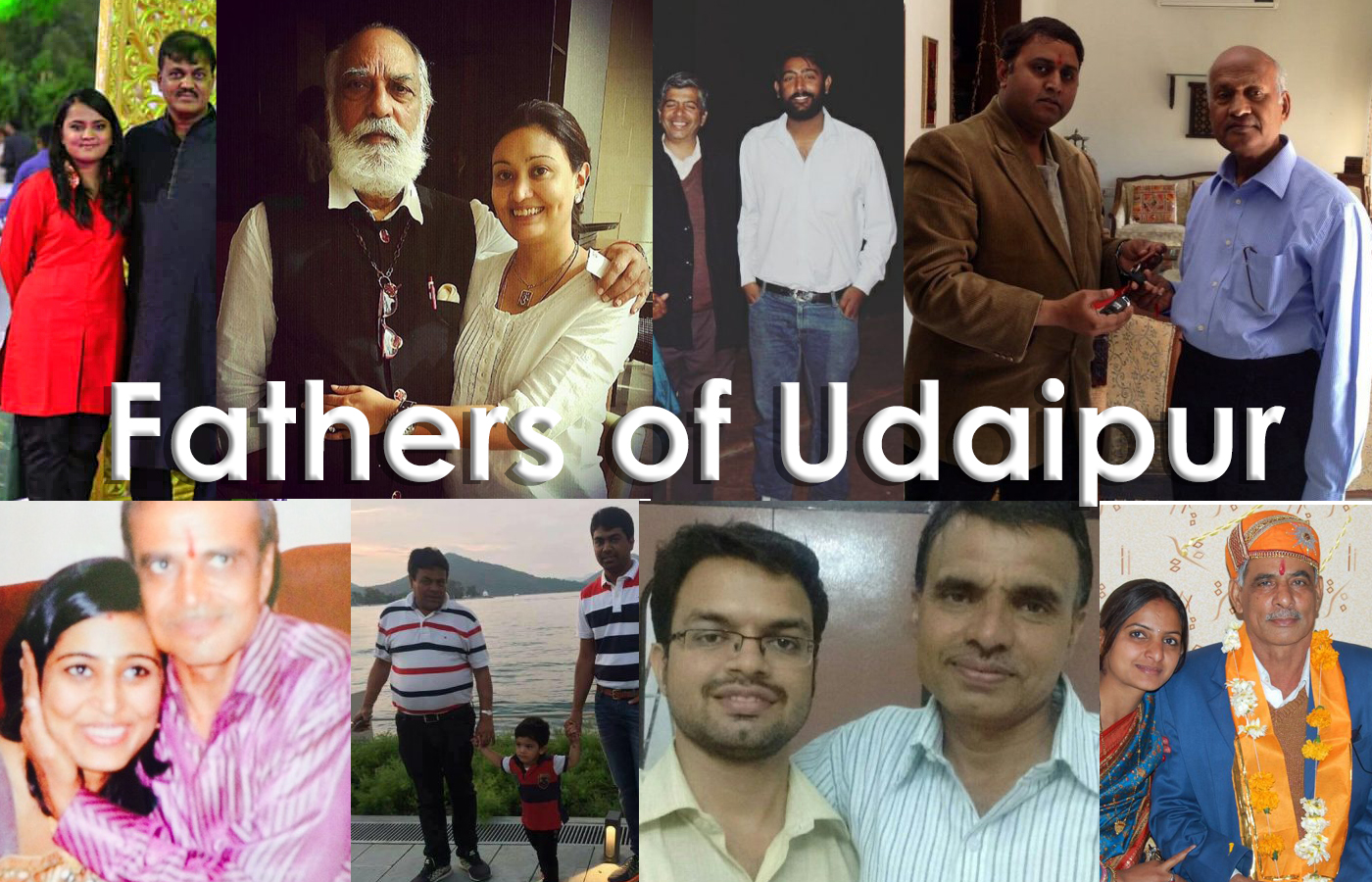 The word father does not require any introduction. He is the savior who never asks for a favor but, completes his duty just by sensing our existence in the mother’s womb. That’s why it’s well said, “Some superheroes don’t have capes…They are called DAD.” For every child, father is the first superhero that he/she has ever been with from birth. No wonder mother’s are sweet but for many, especially daughters, daddies are more adorable in spite of their strict but protective nature. In some or the other way, many of us forget that what our Father’s have done for us. They are not just responsible for our birth but, they have also nourished us to grow every single day, learn new things, and take a stand to face the problems of our life.

That is why all the daddies deserve the celebration which is specially meant for them. On this lovely occasion of Father’s day, UdaipurBlog decided to cover up the few people who have touched the heights of success with their self-struggle and of course with the support of their father’s. And, no wonder these people have done well on their level to turn dreams into reality and to make their dad’s proud. “He never forced me to do things he liked but, to do what I like.” The words of Pritum Suthar were heartwarming for his father. Mr. Panna Lal Suthar, who is in the ancestral business and working as a contractor in PWD since 4-5 years.
Pritum’s father always encouraged each and every step of him. When we asked him about his father, he came up with something straight from his heart and exclaimed, “Being less formally educated and working in carpenter’s profession, he never forced me into the family trade which most of the father’s do in Suthar community in my village (mada, near Gogunda). (It is general trend that after completing 10th or maybe 12th join the ancestral profession and earn). My father stood out of it and helped me realize his dream of doing something which makes my village proud. Today whatever I am, whatever I do is all because of his constant support.” Bhargavi Kumari Mewar tells us how her father Shriji Arvind Singh Ji Mewar, 76th Custodian of the House of Mewar has nurtured, encouraged and mentored her in pursuing her goals and life as a whole. The bond of this duo surprised us that in spite of being so busy with the schedules, they do spend quality time together.
When we asked her to explain the relationship with her father, she shared with us some deep thoughts and emotions – stating, “I feel incredibly blessed to have a father who has not only taught by example but has invested the time to involve me in the process; so these lessons – become experiences. A likely and reliable source to draw from in the future.” She also added, “The greatest thing that has helped propel me both personally and professionally has been my father’s absolute unflinching belief in me. Blessed to call him ‘Da.‘ Dad’s cannot be surprising than this when they support the idea of a street stall set up by their child. That’s the irony we saw in Shubh’s dad Mr. ML Purohit, who started working as newspaper hawker and now owns a wholesome agency in Udaipur.
Shubham expressed heartedly for his daddy with a sweet smile, “He is still connected to his roots and values, and has always taught me the same. Two Years back when I decided to start Chaifeteria (tea stall) he was the first person to come in support of the idea, he told that in business a man has to try more than 10 ideas, and one of it will be the reason for success, so never give up on trial. He has taught me many things in life that proved my real worth.” Being a girl child, belonging to a small town and having a dream to fly a plane can be challenging for many parents to handle. But, for Miti’s dad, the dream of his daughter became a top priority. And, this is what Miti Godawat expressed about her amazing father, “I am a proud daughter of a proud dad. He has been my pillar forever, who gave birth to the confident and independent me. From traveling 7 seas across to deal with government officials alone he has always given me motivation. He is my business and financial advisor who looks upon my ideas and considers them. Most of it, my idol when it comes to facing the world bravely to conquer your dreams. I wish to fulfill his dream of seeing me on that right seat in the cockpit soon”. “My hero, my friend, my mentor, my father!” with a sweet gesture the warm feelings of Mr. Karan Agrawal came over at once. Belonging to a traditional Agrawal family, he too had to bear the burden of household expectations to take over his father footsteps and handle the ancestral business. But, his father’s encouragement in his life is worth knowing. He stated, “My Papa extended his constant support when I started a BPO five years back along with an online food delivery business and today when it’s established I have another baby in my lap. Helping my dad in his marble business shall be a priority throughout but pursuing my business dreams have given me my self-confidence and a self-identity. I owe this to him – My Dad…“. We can entitle her as superwoman Mrs. Kavita Sharma Joshi, who is an engineer, a Sarpanch as well as a mother. And, behind her success and achievements she stated her father like this, “He played a very inspiring role in my life. My dad boosted me to complete my engineering in electronics. During this period, I got married as well and continued the graduation. After studies, I joined Secure Meters as a Hardware Engineer. During my pregnancy, when I was nominated for Sarpanch of Shobhagpura it was tough to cope up. But, by the grace of God we won the election & at the same time I was blessed with baby boy. Driving to the responsibilities as a Sarpanch of my block and mother too, I took a decision to quit from secure meters. The news was shocking for my father as it was his dream to see me as an engineer. But, he understood my situation and encouraged for everything.” Giving a height to the dream of setting up a school in the memories of grandmother and being a constant beacon of inspiration relies on Dr. Ramesh Chandra Somani, father of Dr. Shailendra Somani. When there was a slight conversation about his dad, he said, “His life has been an example of resilience, application of mind and determination. He always strived to give the best resource and education to his kids. He continues to set an example for us by his disciplined hard work every day at the age of 68. His ethos and work ethic have been a great inspiration and influence on MDS institution and me. We are blessed by his presence and wish him good health so that he can continue to guide us.” Successful fashion designer, a diva, and mom of two sweet little kids, Raksha Pokharna, defined her father in a very simple way and expressed us that, “My dad as a person with high spirits never let me give up just because I’m a girl. He always stood up for me and my decisions even for my life’s most important decision whether it was a career, business, or marriage. When I gave a kick start to my venture Queen’s Boutique and received “Arvana Queen’s Award” for budding business woman. The most mesmerizing moments were the appreciation of my father. Thanks to Almighty who blessed me world’s best papa!!”
Last but not the least, I want to thank My Sweet Daddy Mr. Vijay Kumar Khaturia (Co-Owner: Vasudev Dudh Bhandar) for blessing such a great life and supporting my profession of the writer in spite of being less educated. He cultivated me to this level that I can contribute my another family “UdaipurBlog”. A very heartily wishes to all the fathers in the world….”Happy Father’s Day” stay encouraging to your kid’s daddies.