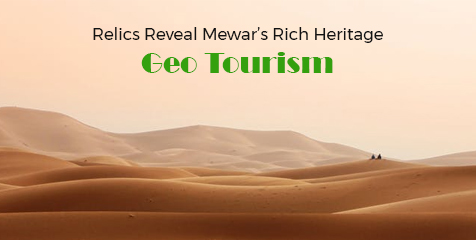 Lake City is a big tourist destination for several reasons. Not many other places have so many attractions for tourists, Indian or foreign. Its scenic beauty with several big and small water bodies in all around the city such as Pichola, Rang Sagar, Swarup Sagar, Fateh Sagar, Badi, Udaisagar, Rajsamand and Jaisamand and hills covered with greenery is a sight to behold. The sanctuaries like Sajjangarh, Kumbhalgarh, Sita Mata and Jaisamand and Sajjangarh Biopark and Baghdera Nature Park and the newly developed Biodiversity Park have a lot to offer to wildlife lovers. In addition to these in several lakes, especially those near Menar, in the region can be sited a huge number of birds of various species. Those interested in history have several places to visit Haldighati, Sajjangarh and Kumbhalgarh Forts. Pilgrims have a lot of places of interest like Eklingnathji, Shrinathji, Dwarkesh Mandir and Jagdish Mandir to watch intricate architecture. One has palaces and haveli’s to visit.

However, there are several places that are wonderful sites of geological interest and reveal our heritage that is centuries old. Recent researches done by geologists in Badgaon near Udaipur have shown that life existed there even 206 Crore years ago. Nanofossils have been found in this village. The findings of studies done by geo-scientists of Punjab in Rajasthan have revealed rocks in Rajasthan that are 370 Crore years old. These findings have been accepted at international levels. Studies of rocks in Udaipur and Gogunda region that are believed to be 330 to 140 Crore years old have also been undertaken. Surveys have been conducted by archeology dept. Of Sahitya Sansthan, Rajasthan Vidyapeeth in Girwa tehsil on the edge of Ahad, Banas, Berach basin and passing through Gadwa, Changedi, Sihada, Bichdi, and Udaisagar. Relics of habitation of the historical and medieval period have been found near Daroli and Mandesar. Near Bichdi Basti rock inscription have also been found. Study of 330 Crore years old rocks of Aravali range in Kherwara region has been undertaken. Facts about the origin of oxygen on earth have also been revealed in a study of German University. At one time, there was sea where there are mountains today.

Each monument has specialization of its own. Located about 18 km south-east from the desert city of Jaisalmer on National Highway 15 to Barmer, Akal Wood Fossil Park has the rare exposure of 180-million-year-old rock that has fossilized tree trunks lying scattered in an area of 21 Hc in the company of invertebrate life remains. A visit to Barr Conglomerate, Pali District located in the vicinity of village Barr on Beawar-Pali section of NH14, leaves one wondering hour a hard-brittle rock piece can be flattened and elongated like plastic clay without it being fractured or fragmented. In Sendra Granite NGM wind and water have become acidic by fluctuations in temperatures, acting over millions of years, have sculpted rocks into marvelous shapes that have fascinated human beings for ages. Here a visitor can watch fancy forms some of which have a strange resemblance to human beings.

At Bichardi, in Pali district, there exists a geothermal well that is rare and unique in Rajasthan. It is a hot water spewing well that has +58-degree centigrade temperature. It has a water table at depth of 30m. The water is pumped out, cooled and then used for irrigation. In the Stromatolite Park, Bhojunda, in Chittorgarh district can be seen stromatolites that are biochemical accumulations which grow through the work of blue-green algae and bacteria in the shallow marine environment. They may produce a variety of structures Another Stromatolite has been discovered in still order Aravali rocks and that too in an economically significant rock phosphate makes to Stromatolic Park, Thamarkota in Udaipur district an undisputed King of National Geological Monuments of India.

Nearer home, the over 2500-year-old Zawar Zinc-Lead Mining Industry is located in a rugged area about 40 km south of Udaipur approached by NH8 to Ahmedabad up to Titdi village, and then a bifurcation to the left least leads one to Zawar village. Zawar is also a railway station on Udaipur-Himmatnagar railway line.  The importance of this geo-park that is defined as a unified area with geological heritage of international significance, can be judged from its recognition as an International Historic Landmark as early as in 1988. The plaque of American Society of Metals at Zawar reads: “At this site are preserved the zinc retort furnaces and remnants of related operation. The village artifacts together with temple ruins at least to the success of this metallurgical technology. This operation first supplied the Zinc for making a brass instrument in Europe, a forerunner of Industrial Revolution”. According to Dr. Ranawat Archeological study by the British Museum, London, MS University, Baroda and Hindustan Zinc Ltd. In 1983 proved that at Zawar metallic zinc was produced by distillation process for the first time in the world.

For as a metal zinc has a relatively low melting point (about 420-degree centigrade) and low alcoholic drink. Carbon dating of time of timber used as support in underground mines and common use of brass in Ayad and other archeology sites of Mewar prove that the area witnessed mineral utilization fairly early in human history. Its recorded and historically impactful use continued at regular but slow pace essentially because mining was done by chiseling as explosives and mechanization were not known them. Five-setting and quenching could have been used in open cast pits or shallow well-ventilated underground mines, but it is highly unlikely that it was used at wet deeper levels that had poor ventilation and damp oxygen-poor ambient condition.

In the opinion of the eminent historian of Mewar, Dr. Shrikrishna ‘Jugnu’, Zawar is known not only for its huge supply of iron, zinc etc but also the processes employed that included hilltop wells the digging of which started at the top and metal mixed ore was thrown out. In this process, there was no danger of flooding. In case of the collapse of sand, wooden planks were used. The technique of Shilabhedan as first described in Brahatsanhita and later on by Chakrapan Mishra, a contemporary of Maharana Pratap was used. In this, processes of breaking the rocks that obstructed mining were explained. One of the ways to break the rocks was to burn the wood of ‘dhak’ and ‘teemru’ wood on them and then sprinkle lime water on them. The ashes of the ‘shar’ tree. The mixture was sprinkled seven times on the rock to break it. Keeping a mixture of ‘Chhaj’, ‘Kanji’, ‘Sura’ and ‘Kulathi’ in a vessel for seven days turned it into a chemical. To break the orck, it was sprinkled on the rock 2-4 times. Neem tree leaves and bark, ‘timru’ fruit, ‘giloya’ etc were mixed with ‘gaumutra’ sprinklings of this mixture six times made the rock break into pieces. It is believed that in 430 B.C metals were extracted in Zawar. Rocks were broken with ‘Chhaini’, hammer etc. and then melted in the furnace of the special type were made with sand in such a way that they were not affected by the three kinds of flames and the optimum temperature was maintained. Possibly pieces of Khejri wood that has the quality of burning for a long time were used to heat the furnaces. Researches by dozens of geologists from different countries like Britain have shown that in smelling round shaped sand pots were used. When not used for this purpose they were used in building houses. Now they have been displayed in a museum built by RSMM and Hindustan Zinc Ltd.

Promotion of geo-tourism through publications, internet, seminars etc with the active participation of tourism and mining depts. NGO’s like INTACH, and chapters of Rotary and Lion Clubs etc.