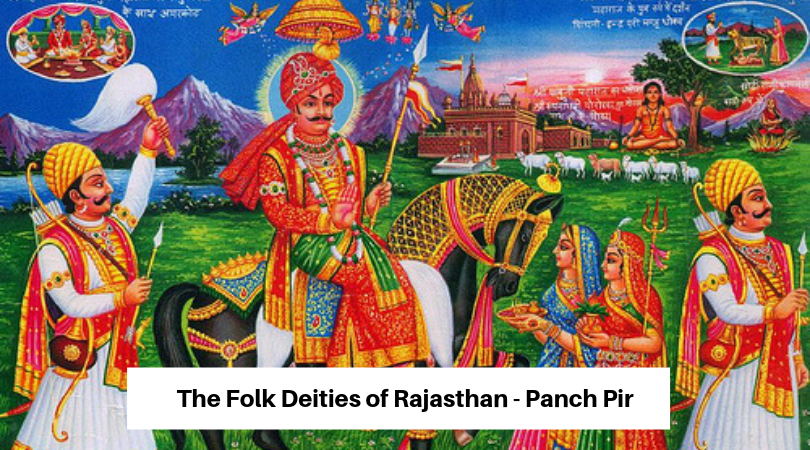 There have been some such personalities in the ancient people’s life of Rajasthan who have taken their lives for public welfare and became immortal in the form of God. Some of these folk deities have been called as Pir (a holy person). According to a rumor, five are in Rajasthan, whose names are Pabuji, Harbuji, Ramdevji, Goga Ji and Meha Ji.

Lok Devata Pabuji was born in the village of Kolumand near Phalodi in Jodhpur district in samvat 1313 (1239 AD). Pabuji’s marriage was fixed with the daughter of Sodha Rana Surajmal of Amarkot. Veer Pabuji Rathore, while taking the Pheras of his marriage, heard that his brother-in-law, Mr. Jindrao Khichi, was arrogating the Deval Charani’s cow. Upon listening to the kidnapping of cows, he immediately stood up between the Pheras and sacrificed his life while saving the cows.

For the same reason, Pabuji is also called the protector of cows, camels and other animals (God of camels). He is also considered as plague protectors. Moreover, when the animals become ill, a thread of his name is tied to the animal. It is believed that it eliminates the disease of the animal. At some places, Pabuji is considered as the avatar of Laxmanji.

Every year on Chaitra Amavasya a huge fair is conducted at Pabuji’s main temple in the village Kolumand, Jodhpur where devotees come in thousands and offer tribute to them.

There are very few such deities in the country in front of which both Hindu and Muslims shower their faith. Ramdev Ji is one such deity. Ramdev Ji was born Bhadarva Shukla Dooj in Vikram Samvat. 1409 at Ramderiya in Barmer district. It is said that Ramdev Ji had some miraculous powers and that is the reason his fame reached to different parts of the country.

Legends say that five Pirs from Mecca came to test the powers of Ramdev Ji. He invited them to have lunch with him. The pirs said that they only eat in their personal utensils. On hearing about this, Ramdev Ji smiled and said that look your utensils are coming and the pirs saw that their bowls and utensils were coming their way flying in the air. This convinced the Pirs about the powers and abilities and gave the name ‘Rama Shah Peer’ to him. The Pirs were so overwhelmed by his powers that they decided to stay with him and their samadhi is also near the samadhi of Ramdev.

Ramdev is also considered as an incarnation of Lord Vishnu. Thus, he has become a center of faith for Hindus as well.

Meha Ji was born in the 13th century in the village Bapini village of Jodhpur district, Rajasthan. Mehaji was married to Mahecha Mallinath’s daughter. Mehaji had promised a woman to protect her cows, who was her sister by religion. Meha Ji sacrificed his life while saving the cows. A huge fair is conducted every year on the occasion of Janmashtami at Mehasagar Lake near Jodhpur.

After the demise of his father, Harbuji left the village Bhankale and performed penance in the forest of Chakhu village of Phalodi (north-west of Jodhpur). Here, he met the famous folk god of Rajasthan, Ramdev Tanwar. From then on, Harbuji became the disciple of Ramdev Ji’s teacher, Guru Balnath. Mandor (Marwar’s capital) was captured by Mewar after killing Rathore Rampal. The son of Ranjit Rathod and the founder of Jodhpur, Rao Jodha was struggling in a guerrilla war to liberate Mandor from Mewar. During all this, Rao met Harbuji in the jungle of Jodha. Rao Jodha sought the blessing of success in the battle of his freedom against Mewar from Harbuji. Harbuji blessed him and predicted that his reign will spread from Mewar to Janglu. His predictions came true and Rao Jodha’s heroic descendants ruled till India’s independence.

Veer Gogaji was the ultimate disciple of Gururgorkhnath. He was born in Vikram Samvat 1003 in Dadreva village of Churu district. The birthplace of Siddha Veer Gogadev is located in Dattakhera Dadreva of Churu district of Rajasthan, where people from all religions and sects come from far away to seek blessing from him.

Back in his time, Gogadev’s marriage was fixed with Kolmand’s princess, Kelmade. But just before the marriage, Kelmade was bitten by a snake. Gogaji became angry and started chanting his mantras. With the power of his mantra, all the snakes began going towards a pan of hot oil and started dying. On coming to know about the fact, the King of snakes came and apologized to Gogaji and sucked the poison out of Kelmade. This calmed Gogaji.

This is the reason why Gogaji is popular as the ‘protector of snakes’. Even after being a Hindu, he has many Muslim devotees and is chiefly considered to be a Pir who had the power to cure the effects of the poison. Various fairs and celebrations are conducted all around the country to worship Gogaji. These regions include Punjab, Haryana, Himachal Pradesh and the northwestern districts of Uttar Pradesh. His followers can also be found in Gujarat and Madhya Pradesh.