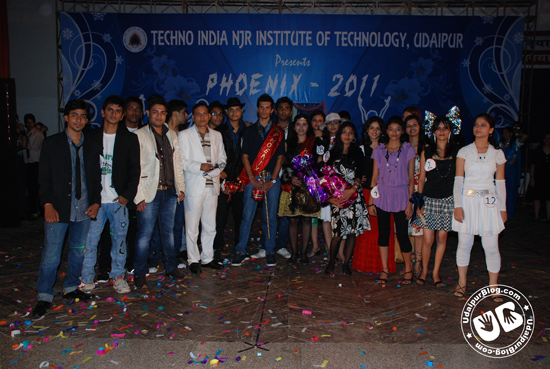 Techno India NJR Institute of Technology celebrated its 4th Fresher’s day on 10th September 2011 as Phoenix 2011. The celebration was held at the MLSU auditorium, in front of the entire Techno NJR family. There were a series of performances by the seniors who welcomed the freshers and wished them good luck for their new step after school. The best students, and achievers were felicitated, followed by a movie presentation by Upesh Bhatt and Prasun Bannerjee showing glimpse of past years. Director Mr. R.S. Vyas announced and awarded Mr. Piyush Javeria as the best faculty for the year, and introduced the college to the new vice-principal, Dr. Pankaj Porwal. The freshers walked on the ramp, showed themselves and their vivid talents in the fresher contest. In the end, Vikramaditya Rathore was awarded as Mr. Fresher and Shivani Singh Rao as Miss Fresher for the year 2011. Surbhi Jain and Devkaran Singh Rathore were the runner ups.

The Techno India NJR institute of technology also had its 4th foundation day on 11th September 2011.

Here are few glimpses from the event Phoenix-2011: 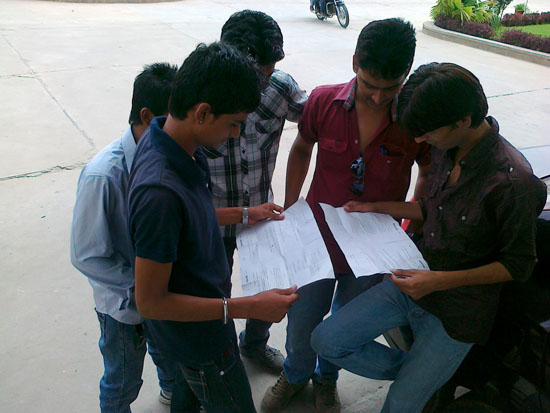 The joy of the last day of exams is a much thrilling experience, when finally the stress of the exams and long hours of studies are over, finally a breakpoint is achieved, and everybody has new plans for the forecoming vacations. But unfortunately due to some anti-social activities by few mischievous persons, the happiness came to an end.

The mathematics examination paper of RTU(Rajasthan Technical University) 2nd semester (B.Tech) was leaked the day before the original exam date, i-e 4th July. As a result, a re-examination for all 2nd semester students of the same subject was held today, the 12th of July. The paper was comparable to the previous paper that leaked in terms of hardness, but since the students could get a longer span of time for preparations of the exams, hence they could attempt it well. We wish all these students all the very best for their results, and hope that they do not have to appear for another re-examination. and of course, Happy Vacations 🙂

To unite all the ignited minds of all engineers all over Udaipur, Geetanjali Institute Of Technical Studies, popularly known us GITS is organising a grand Techfest called Technoholix.

Technoholix started as an intra college event held in year 2008. Last session Technoholix went big, inviting participation from engineering colleges all over Udaipur with an endeavor to bring spirit of knowledge, culture and festivity.

This is a National Level Inter College technical symposium being conducted by the Department of Computer Science & Engineering of the Geetanjali Institute of Technical Studies, Dabok (Udaipur) for the students of the Computer Science fraternity.

It defines itself as a conglomeration for the creative, the intellectuals and the inquisitive, Technoholix is the platform for the engineering in a student. With participation from over colleges across the Udaipur and multiple events testing students’ prowess in both technical and non-technical aspects, this is an ideal place for all ignited minds.

This year Technoholix is being organised from 3rd to 5th March 2011 with various interesting and creative events.

The special guests of honour will include

Registrations are open. Registration process will be done through sending SMS. The details for SMS can be viewed on the registration page of the Technoholix website

For more details log on to http://www.technoholix.gits.ac.in
as well as http://www.facebook.com/technoholix2011