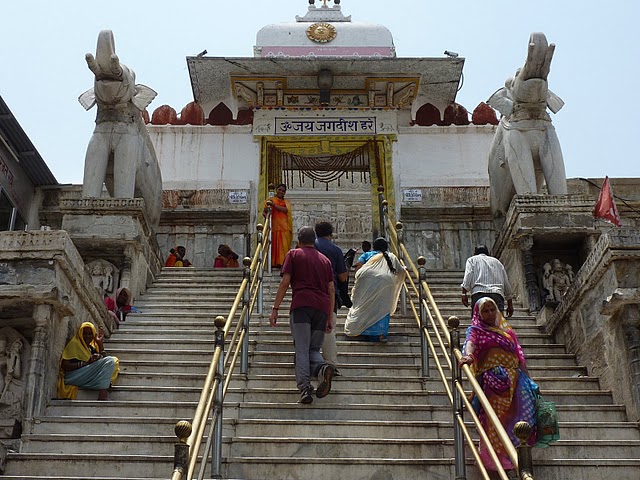 One of the most popular temple of the City of Lakes, Jagdish Mandir was built by Maharaja Jagat Singh in 1651. From then, it has been a great place of attraction for the tourists as well as the localities. It is well furnished with marble floors all over the premises. It is built in the great Indo-Aryan Architectural style. The idol room is easily accessible with well constructed 32 steps leading directly from road to the adobe of Lord Jagdish. Moreover it’s a centre for people’s inspirational homage.

It is only one of it’s kind. If considered on typographical and geographical status it it well situated on high altitude. The miniature carvings on the walls as well as inside the premises can leave any spectator spellbound. The chowk just outside the temple, also known as Jagdish Chowk has always been a place of keen interest and attractions for tourist.

It also hosts the Rath Yatra, which can be considered as Carnival of India. In this festival Lord Jagdish is taken around the city in a Silver Chariot especially made for the occasion. A huge lot of skilled workers assemble the parts of chariot and joins them before the Yatra. Rath Yatra is basically a festival of Orissa. It is well celebrated in the city of Lord Jagdish, Puri. The Rath or Chariot of the lord is pulled by many die hard devotees of the city on shoulders. It takes almost 8 hours for the devotees to complete this journey from Jagdish Mandir to Jagdish Madir again encircling whole city. The Lane Of God:

The lane of God as the title has God in it, in the same way lord Jagannath or Lord Jagdish resides in the heart of Udaipurites. The temple is situated on the top of the Jagdish Chowk. Underneath it lies a whole world of faith, devotion and unbreakable trust. From the foothills of the temple runs a series of streets, so small in area that it becomes difficult for a four wheeler to pass by, yet so large that the best of Udaipur, almost one fourth of population and the traditional coefficient lies there.

The streets may be very narrow geographically but are very broad emotionally. And above all on the top of these streets is a temple, which acts as a father to these streers. There had not been many magics or miracles by Lord Jagdish, but as it is said ‘ Kingship requires no Kingship’, in the same way Lord Jagdish don’t require any evidence of miracle to proove his kingship. People’s faith is very much enough. Udaipur is a city gifted with many temples but this temple has got its own significance, as it is the most special one in people’s as well as city’s heart. Not only people of the city are blessed with blessings of Lord Jagdish, but evey article, every artefact, every monument in the shops along this lane of god has had glimpse of god in them. When a person visits this temple, his heart is filled with silence, this silence is not of words but of mind, silence of mind. Such is the reign of Lord Jagdish. Adjacent to the temple lies a big market in small streets. In this market lies the true essence of Udaipur. The Miniature Art Paintings, Rajasthani Dresses, Traditional Hookahs and many other merchandises that can make anyone a toothless tiger. Any person can be flawed by the flawless work done by the craftsmen. This very market and these streets are rinsed with love, care and affection of the localites. The area also serves as a place for many roof-top restaurants, havelis, traditional hotels and motels, ghats and many more places of interests.

The famous ghat of Udaipur, Gangaur Ghat is barely 100 metres away from the temple. The Royal City Palace of Udaipur is at distance of stretched hand. In short this temple is good house to be on. 🙂