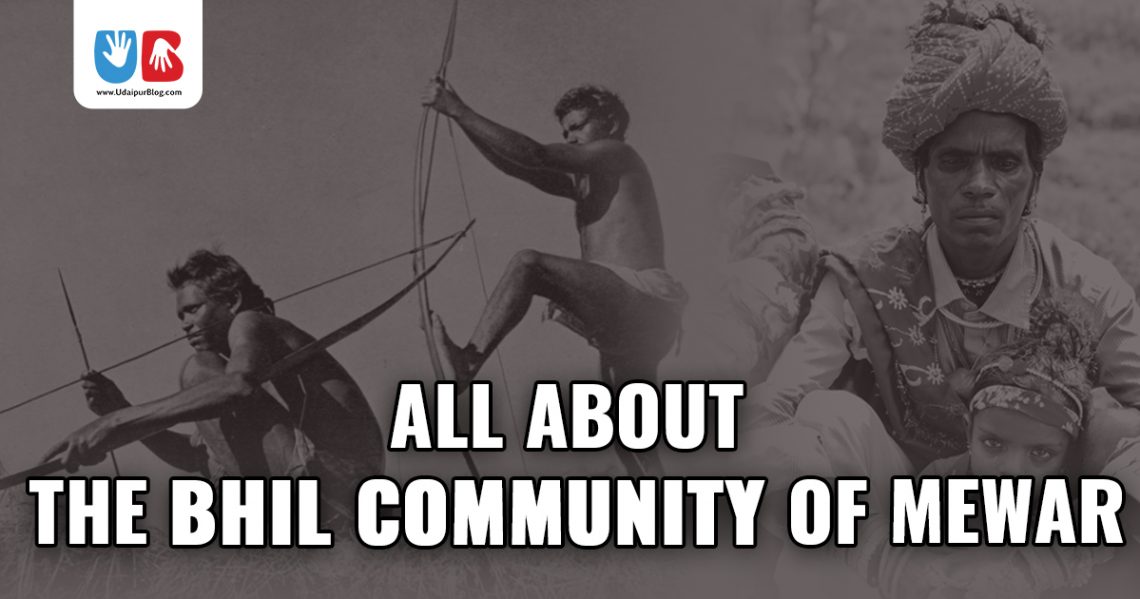 Bhils and the Origin of Medieval Mewar (Bhilwara, Banswara)

The history of Mewar cannot be written without elaborating on the contribution of the Bhils. Bhils constitute one of the largest tribes in India and are found in the regions of Rajasthan, Gujarat, Madhya Pradesh and Chattisgarh. The Bhils are a proud community of the Aravallis and hold an extremely respectable position in Mewar. The Coat of Arms of the House of Mewar comprises the Rajput on one side and the Bhil warrior on the other, together guarding the territory of Mewar. This signifies that it is the Bhils and the Rajputs together who have defended Mewar jointly against all attacks and dangers. The Bhils hold a position of high regard and over the years, have exemplified the motto of Mewar: “Jo Dridh rakkhe dharmko, tahhi rakkhe kartaar”; meaning: God protects he who defends Dharma.[1]

The contribution of the Bhils in the history of Mewar and its defence against invaders appears historically certain and backed by authentic evidence. As quoted by Mahendra Singh Bhanawat, the ruler of Abu around 1190 CE was Jetsi Bhil who lost his throne to king Bheemdev II of Gujarat. The descendants of Jetsi claim to be of Parmar descent. According to Shyamaldas, Dungarpur was established by Dungariya Bhil and Kota was established by Kotia Bhil. These rulers lost in battles to different kings of other states of Rajputana.[2] It is possible that they retired to the forests after these defeats.

The idea of a forest dweller is also a pretty tricky idea because those were the days when large parts of the land were forested areas and the chasm between the forest and the nagara/gram was not very sharp. The region of Bhilwara which is now an urban industrial centre was once a forested region with a large population of Bhils as is clearly evident from the name of the city. The mention of Vishna Bhil as the founder of Banswara is also commonplace. The royal insignia of the state of Kushalgarh also contains a Bhil warrior on one side and a Rajput on the other. The Bhils of Mewar resided mainly in deep forests of the mountain ranges around the region and agriculture, poultry, hunting, and wood carpentry are a part of their lifestyle. Their life is based on herbs and plants for physical well-being and existence. 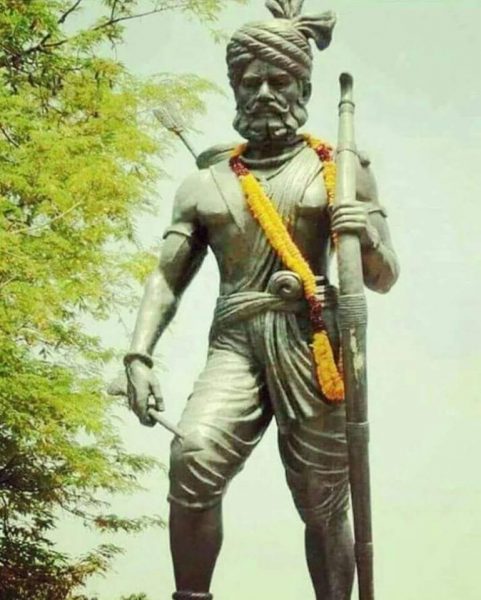 Perhaps the most iconic and popular Bhil figure in the history of Mewar is the Bhil chieftain Rana Punja who fought alongside the great warrior king Maharana Pratap in the battle of Haldi Ghati in 1576. Punja was awarded the title of ‘Rana’ in respect of his bravery and sacrifice. ‘Rana’ is the title which is used by the king of Mewar himself. This depicts that the king of Mewar held the Bhils and their contribution in extremely high regard.  After the battle of Haldighati was over and the Mughals were unable to capture Pratap, Man Singh, the Senapati of the Mughal army and other Mughal warriors camped at Gogunda to try their last attempt at capturing Pratap. With the help of Bhil and Rajput warriors, the army of Maharana surrounded the encampment of the Mughal army and cut off their supplies of food and armament and made them crippled for almost four months. Tired and famished, fighting the Rajputs on the way, the Mughal army somehow reached Ajmer where Akbar was then staying. Defeated and frustrated, Akbar sent a number of military campaigns but the Maharana pursued the tactic of guerrilla warfare in the thickets of Aravallis with the constant support of the Bhils and succeeded in decimating the Mughal army units multiple times.[3]Finally in 1582, on the auspicious day of Vijaydashmi, Pratap defeated the Mughal forces in the battle of Dewair where the Maharana permanently closed 36 Mughal outposts in Mewar and ultimately recaptured the whole of Mewar except Chittor, Ajmer and Mandalgarh.[4]Tod writes another anecdote of Pratap’s days in the forest when his family was saved by the Bhils who carried his young children in baskets, hid them in the mines of Zawar, and guarded and fed them.

In 1661, the Rajputs defeated Emperor Aurangzeb with the help of Bhils. In 1767, Ahilyabai of Malwa began to oppress the Bhils but it could not last long in the face of the constant resistance of the Bhils. In the eighteenth century, Marathas and Pindaris constantly attacked Mewar and the Bhils stood hand in hand with the Maharanas to fight them and defeat them on several occasions. The Marathas and Pindaris wreaked havoc on the Bhil population and tortured them in many ways. The period of 1805 to 1817 saw a period of the constant struggle between the Bhils and the Marathas.

Contribution Of Bhils In Freedom Struggle Against The British

Source: My India My Glory

A golden era in the history of the Bhils is seen in their independence struggle against the British when they became immortal names in the Indian freedom struggle. The ruthless attacks of the Marathas and the Pindaris had impoverished the Bhils and they then resorted to robbing and plundering to fulfil their basic needs. This was also a period of deterioration of Rajput-Bhil relations. The contemporary Maharanas had entered into a treaty with the British and lacked the courage, determination and perseverance of the likes of Sanga, Pratap, Kumbha and Amar Singh. The British officials pursued a cruel policy against the Bhils and treated them as criminals. The Rajputs remained complacent and distanced themselves from the Bhils as they considered themselves to be superior to them, having forgotten the glorious past of Bhil loyalty and Rajput-Bhil companionship. The Bhils, still fearless and proud, were left to fend for themselves. The acts of loot and plunder carried out by the Bhils continued to irk the authorities. James Tod, as the British agent in Mewar advised the Maharanas to employ British troops against the Bhils.

The British then employed the Bhils in the British army as a separate regiment called the Mewar Bhil Corps in 1841. The British Agents in Mewar tried to criminalize the traditional practices of the Bhils and often put pressure on them to pay revenues to the state which was strongly resisted by Bhil chiefs. The Mewar government increased taxes and imposed new levies and on the advice of the then British Agent imposed restrictions on the illegal levies that the Bhils chiefs had started collecting. They were also prevented from cutting grass, cutting wood, distilling liquor from Mahua leaves and accessing other forest produce. The British monopoly on salt and opium increased the prices of these commodities. These actions worsened the economic conditions of the Bhils. Extension of civil and criminal jurisprudence to Bhil regions amounted to interference in the internal autonomy of the Bhils. The British effectively used the Bhil corps to suppress Indian resistance movements like those of Tantya Tope. However, two Bhil gametis joined Tantya Tope.[5]

Continuous exploitation, worsening economic situation and cultural and political interference of the British and the indifference of the Maharana to their cause finally erupted in the Bhil revolt of 1881. The immediate cause of this revolt was twofold: 1. the census operations of 1881  2. The killing of a Gameti of Padona by a thanedar of Barapal. The real causes, however, lay in the aforementioned discriminatory policies and the oppressive attitude of the authorities towards the Bhils which reeked of apathy and superiority complex. The Bhils of Mewar in 1881, thus rose in revolt which was seen as a threat. The Maharana acted swiftly perhaps in a manner of condoning his past mistakes which had been committed at the advice of the British. He accepted 21 demands of the Bhils at Rekhabdeo and prevented the intervention of the British which could have resulted in ruthless suppression and a further deterioration of Mughal-Rajput trust. The revolts of the Bhils lacked coordination but some effective leadership was provided by Daulat Singh.

In the early twentieth century, there emerged a social reformer and leader of the Bhils in southern Rajasthan. His name was Govind Guru, a religious leader who called upon the Bhils to proudly assert their traditions and fought against bonded labour but also worked towards eliminating social ills within the Bhil community such as non-vegetarianism and the prevalence of alcohol consumption. This movement is known in history as the Bhagat Andolan. In 1913, six years before the infamous Jallianwala Bagh massacre, the British army killed nearly 1500 unarmed followers of Govind Guru in cold blood at the Mandalgarh Hill at the Rajasthan-Gujarat border. This largely forgotten inhumane massacre is known in history as the Mandalgarh Massacre and is often called the forgotten Jallianwallah Bagh of Rajasthan.

The Bhils were also inspired by Gandhian ideas which found momentum in the 1920s when the Non-Cooperation movement was slowly churning national consciousness. In April 1921, Moti Lal Tejawat, a Jain from Mewar launched a movement of the peasants of Mewar to express their grievances to the Maharana. He demanded a reduction in land revenue and administered the oath of Aiki or unity to the Bhils. This is known in history as the Aiki Movement. Tejawat marched to Udaipur with a charter of his demands with a group of 8000 peasants.

Most of his demands except some were accepted by the Maharana. However, he continued to fight for the rights of Bhils and other tribes and continued his resistance against feudal excesses. Some instances of violent attacks against state officials by Bhils were also reported. The uprisings were met with repression from the British officials who responded with force resulting in open firing in some cases and massacres in places like Valeria. The tribes under Tejawat continued to resist eventually resulting in the arrest of Tejawat by the Mewar Government on the advice of the British. The Aiki Movement was inspired by Gandhian ideals but like many other Gandhi-inspired mass movements, it also developed some violent streaks. The movement invited Congress’ attention to the cause of Bhils and Mahatma Gandhi himself praised Tejawat’s leadership. Sardar Vallabh Bhai Patel presided over the annual conference of Bhils at Jhadol in 1927. In this way, the Bhils and other tribes like Garasias contributed towards the Indian independence movement and must be celebrated proudly as freedom fighters.[6]  As we celebrate the Amrit Kaal of independence, it is very important that we remember and celebrate the Bhils who laid down their lives for freedom. 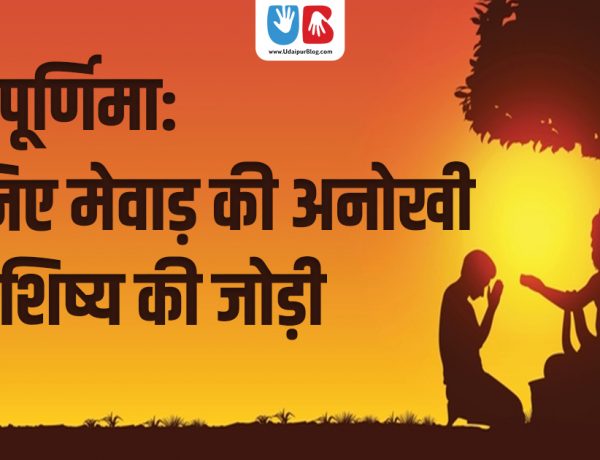