Black Fungus Declared an Epidemic in Rajasthan: Know All About the Treatment of Black Fungus in Udaipur 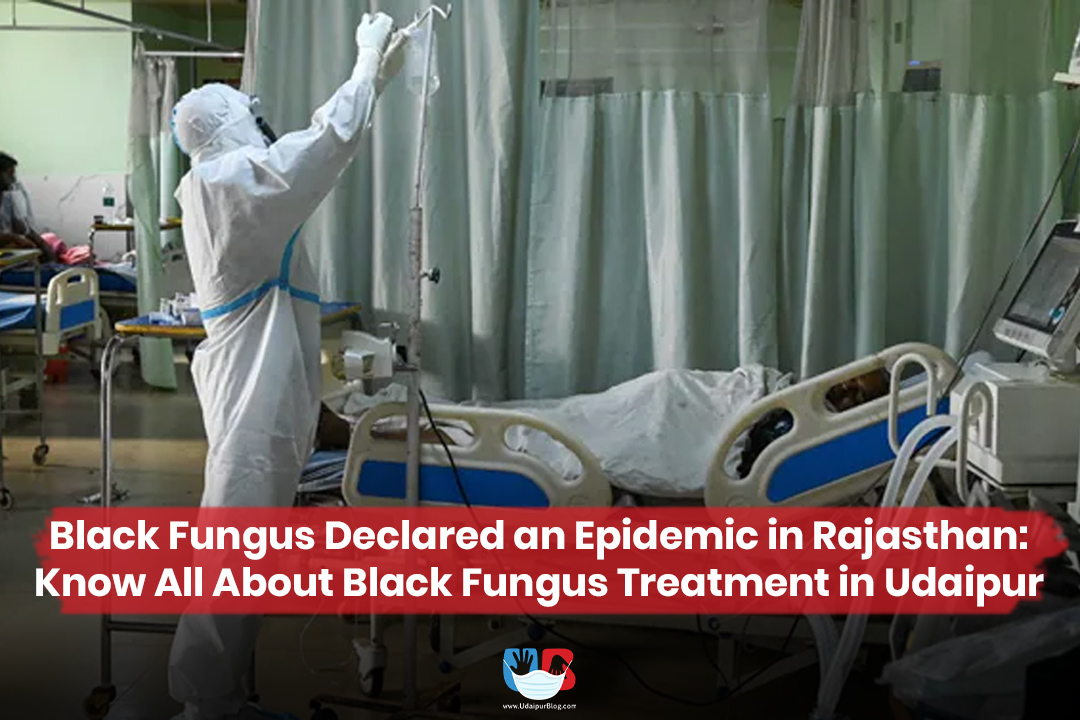 As per the sources, Black Fungus or Mucormycosis, primarily affecting the people recovered from the COVID-19, was declared an epidemic in Rajasthan on Wednesday, 19th May 2021. The state has recorded more than 400 cases in Jaipur and Jodhpur, and the fungus is spreading quickly through Udaipur, Sikar, Pali, Barmer, Bikaner, Kota and other districts. Following the declaration of black fungus as an epidemic, the government claims that the condition and the harshness of treatment will now be effectively monitored. More than 45 patients have been admitted to the SMS Hospital in Jaipur alone. After the hospital’s 33-bed ward became overcrowded, a surge in the cases was established. More than 70 cases of this sickness have been reported thus far in Jaipur’s private hospitals. In Jodhpur’s AIIMS and Medical College facilities, more than 100 cases have been documented. In Bikaner, there have been around 30 cases.

Mucormycosis or Black Fungus in Udaipur

While the population of Udaipur and beyond were already fighting the challenges presented by the pandemic followed by the strict lockdown, the news of Black Fungus, also known as Mucormycosis, has further put them in a threatening and stressful situation. Black Fungus has also landed in the middle of Corona’s developing change in the Udaipur division. The RNT Medical College of Rescue’s expert team was formed. Only 11 shots are available at RNT Medical College in Udaipur, and a hundred more are being purchased in preparation for the anticipated surge.

Seven patients with black fungus have been admitted to RNT Medical College, Maharana Bhupal Hospital, ENT department. The experts from the RNT College, Udaipur, have further added that aside from the eyes, black fungus illness particularly affects the jaw. If not treated promptly, the eyesight will deteriorate, and the jaw will become deformed. Experts have stated that once the sickness has reached the brain, there is no way to retract it.

Treatment for Black Fungus in Udaipur

The state government has made the treatment of Black Fungus free of cost under the Mukhyamantri Chiranjeevi Yojana. Under the scheme, all the beneficiaries will be able to get the disease treated free of cost in both government and selected private hospitals.

There has been a continuous increase in the number of patients with black fungus (mucormycosis), which appeared as a side effect of the Coronavirus. On the other hand, Black Fungus has been declared an epidemic and notifiable disease in the entire state under Rajasthan Epidemic Diseases Act due to its coordinated treatment with Corona. Now the data of all government and private hospitals that treat and identify the disease will remain with the state government. The doctors are suspicious after getting a look at the symptoms, but it is taking 3 to 5 days to detect the Black Fungus disease in the patient. The treatment of Black Fungus has started in Udaipur in the Burn Ward of MB Hospital, however, there is a shortage of medicines to continue the treatment of patients. The symptoms include pain or redness around the nose, fever, headache, cough, difficulty in breathing, vomiting blood, and changes in mental state.

The Rajasthan government has fixed treatment rates in hospitals for the treatment of Mucormycosis (black fungus). The fixed rates have been issued by the government on Friday, 21 May 2021. The Rajasthan Medical and Health Department has fixed the rates for all types of tests related to Mucormycosis (black fungus) along with corona test in private hospitals and labs in Rajasthan. 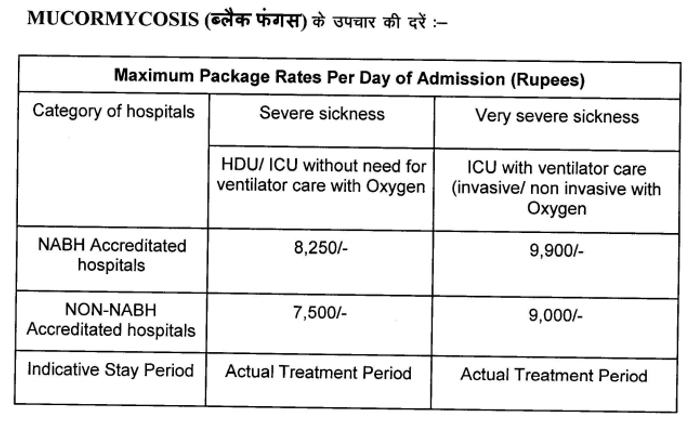 Also, for the treatment of this disease, 20 hospitals in the state have been recognized, in which 4 hospitals are from Udaipur, and those are:

The state government and District Administration have geared up the process and treatment of Black Fungus in Rajasthan. As per Dr. Lakhan Poswal, Principal, RNT Medical College, Udaipur, a different ward has been dedicated for the patients suffering from Mucormycosis or Black Fungus in Udaipur and a team of Senior Doctors has been appointed to take care of ENT, Eye, Neurosurgery, and any general surgery, if required.

See the full video for more updates on COVID-19 and Black Fungus treatment in Udaipur.

Is Black Fungus a Threat for People in Udaipur, Rajasthan?

The only drug that can prevent this fungus and infection is a liposomal amphotericin-B injection, which is in short supply on the market for now. Families of suffering patients are compelled to stroll from place to place in search of an injection. As a result, the local bodies have asked the federal government for this injection. Aside from that, the government has made an order with the Serum Institute of India for 2500 vials of this injection to be purchased.

Here are some facts as to why Black Fungus is a threat for people living in Udaipur and nearby cities in Rajasthan:

What is Black Fungus, and why is it so deadly?

While fungal infections aren’t as uncommon or new as COVID-19, the number of instances has increased lately. The illness appears to have the most impact on people who have severe COVID-19 infections, causing people who have recovered from COVID-19 to end up in hospitals again with strange facial deformities. Black fungus infection, also known as fatal Mucormycosis, is caused by a group of moulds known as ‘mucormycetes,’ which are found in the air and create complications when inhaled by an unwell patient, spreading to the sinus cavities, lungs, and chest cavities. Steroids are prescribed to corona patients to lessen the consequences of the infection. This lowers the patient’s immunity. As a result, the patient’s blood sugar level begins to rise suddenly. Mucormycosis is one of the negative effects of the drugs used to treat Corona patients. This condition creates a dry nose at first. The inside of the nose begins to dry out and become numb. The face and soles of the feet go numb as well and the face begins to swell, while the teeth are seen crooked. In this condition, fungus grows around the eye’s veins, blocking the central retinal artery’s blood supply. In most people, this causes their eyesight to last forever. Furthermore, the fungus creeps to the lower jaw in many patients.

Patients with comorbidities or those using drugs that reduce their immune system’s ability to fight off environmental microorganisms are the most vulnerable to the effects of black fungus, according to ICMR guidelines. Poor contaminated water resources utilised for the manufacture of medical oxygen and ambient variables have been suggested as possible causes of Mucormycosis infection in COVID-19 patients on prolonged oxygenation support. There have also been worries that COVID-19 individuals with severe diabetes are the most vulnerable to the disease. Uncontrolled blood sugar levels not only make it simpler for people to catch serious illnesses, but they also provide an easier surface for fungi to thrive and transmit symptoms.

What are the Symptoms of Black Fungus?

The black fungus has a high mortality rate of 50%. However, if the disease is detected early enough, it can be effectively treated. The disease, known as ‘rhino-orbital-cerebral mucormycosis,’ primarily affects the face and can result in distinct facial distortions.

Aside from that, the condition might cause acute swelling and inflammation in the sinus tube. If you have recovered from COVID-19 and are wondering about how to locate the Black Fungus, then have a look at these distinct symptoms, which you should be on the lookout for:

After the Coronavirus, Rajasthan is now experiencing a severe threat by the new epidemic that is Black Fungus or Mucormycosis. However, we are bound to stay strong in these challenging times. UdaipurBlog requests you to stay safe, always wear a mask when going out, sanitize your hands regularly, and most importantly, maintain Social Distancing. Stay tuned for more such updates on the Second Wave of Coronavirus in Udaipur and beyond. Meanwhile, go get vaccinated to safeguard your family and yourself from the COVID-19. Click Here to know how to register for the COVID-19 Vaccine Online.

The Dialysis – to Purify the Things 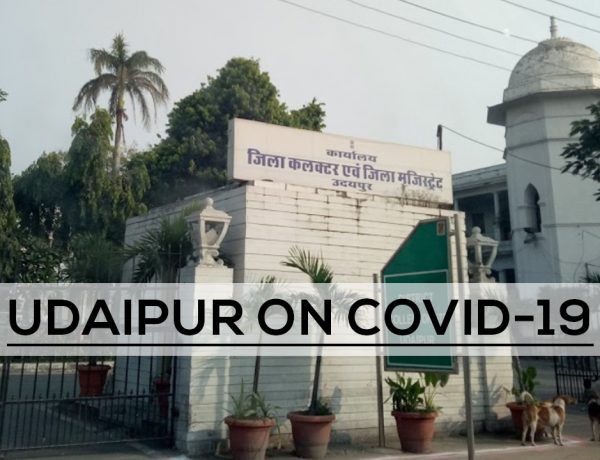